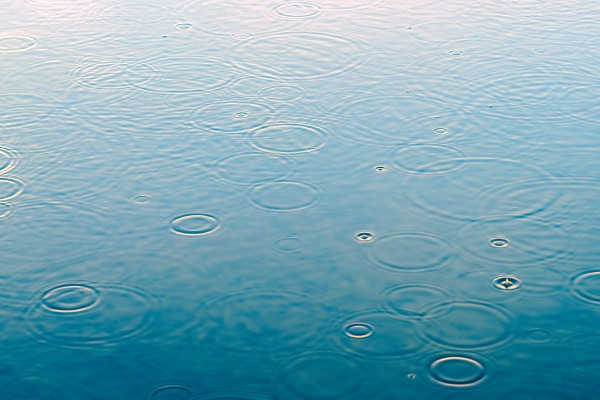 Photo by jplenio from Pixabay

During your trip in Japan, you will probably check the weather forecast on the Internet, TV and other media and decide your activities for the following days. Weather forecasts tell you if it will be sunny, cloudy or rainy along with the temperature range so that you can quickly understand the weather situation in the near future. They will also provide the weather charts to explain the reason behind the forecast. However, it is probably not easy to understand for foreigners without any prior knowledge about the typical weather patterns in Japan.

Let us explain some typical weather patterns in Japan to help you read weather charts included in the forecast. Before looking into the patterns, it is important to understand that Japan is located in the mid-latitude and the Westerlies are dominant in the upper air. It means that the weather changes from the west to east in a big picture.

All the surface weather chart in this page are products of the Japan Meteorological Agency (JMA) and they have the copyright of these charts.

The weather in spring in Japan changes rather quickly, every 3-4 days. It is caused by the low pressures coming from the west of Japan. As a low pressure approaches, the weather gets worse and chances are that it will rain and become cold. A high pressure follows a low pressure and it brings fine weather and the temperature rises during the day time thanks to the sunshine. And then, the weather situation alternates as the low and high pressures approach. The following weather charts are from 3 consecutive days in March 2019, and you can see the alternation between High and Low above the country. 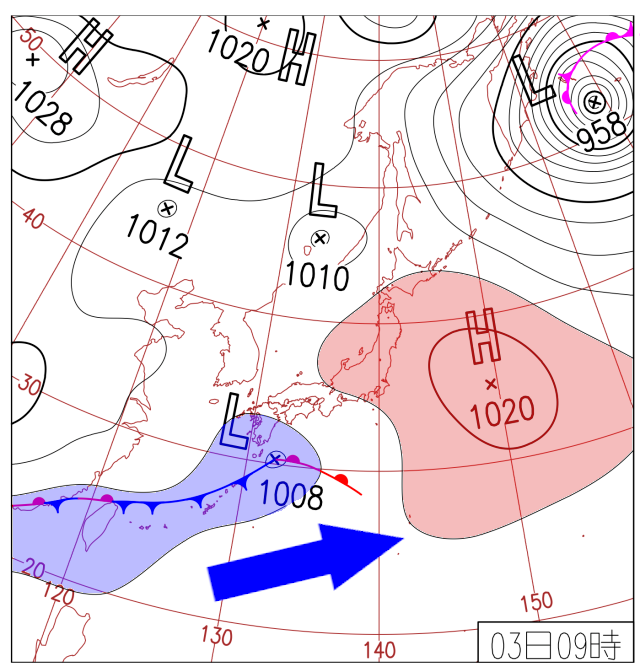 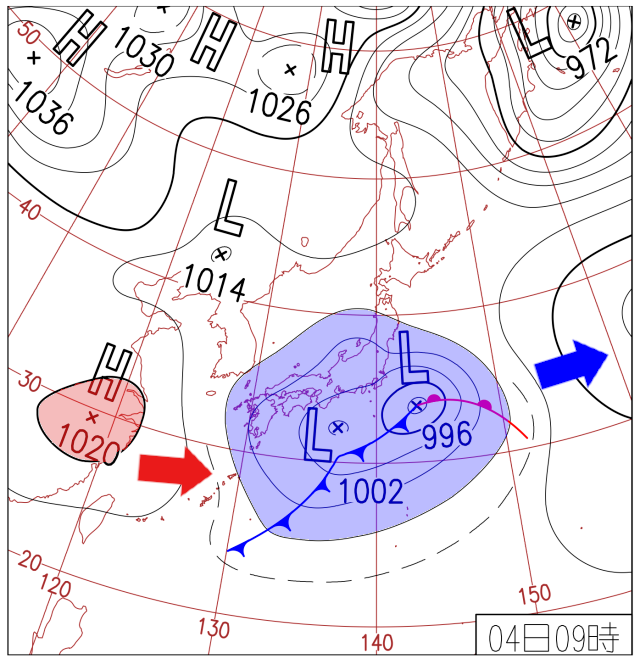 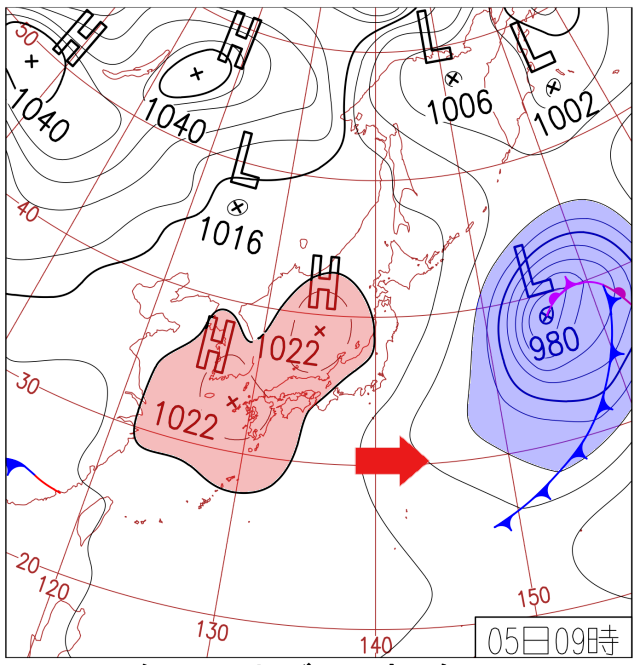 Caution must be taken as the temperature at a clear night can drop even lower than a cloudy night because of the radiative cooling and the temperature gap between day and night can be larger. It is recommended to take a jacket if you go out at night during this season, even if it was warm during the day time. 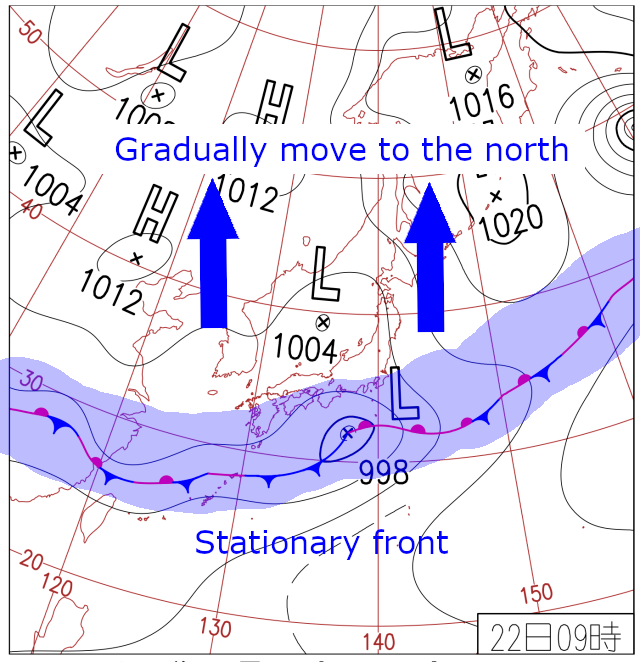 Usually the weather is not good near the stationary front as the rain bands are formed along the front and they will bring rains. A low pressure is generated along the stationary front, especially around the vending point of the front. Such a low pressure can cause heavy rain as it sucks warm and humid air from the south and generates a cluster of cumulonimbus clouds. Occasionally, the heavy rain intensifies in such a short time that roads will be flooded, so please watch out for any warnings from the JMA. 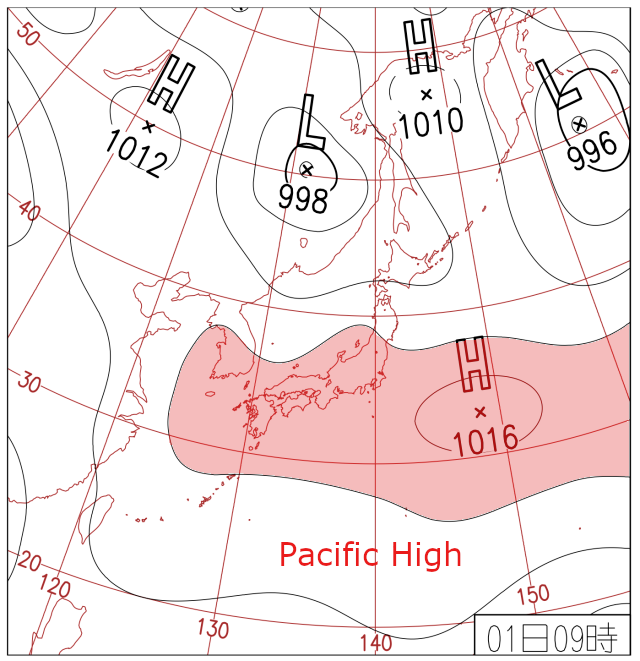 Although the weather is fine in general, continuous strong sunshine heats up the ground and generates strong rising air currents. Cumulous and cumulonimbus clouds are then formed which brings shower, especially in the afternoon to early evening.

A typhoon occurs in the Philippine Sea, North China Sea, or South China Sea and approaches Japan from the south. The route is mainly affected by the coverage of the Pacific High. If the Pacific High extends enough towards west, the typhoon cannot approach Japan and go towards mainland China or the Korean Peninsula. So, the number of typhoons approaching Japan increases at the end of Summer up to the beginning of Autumn, which is around September. 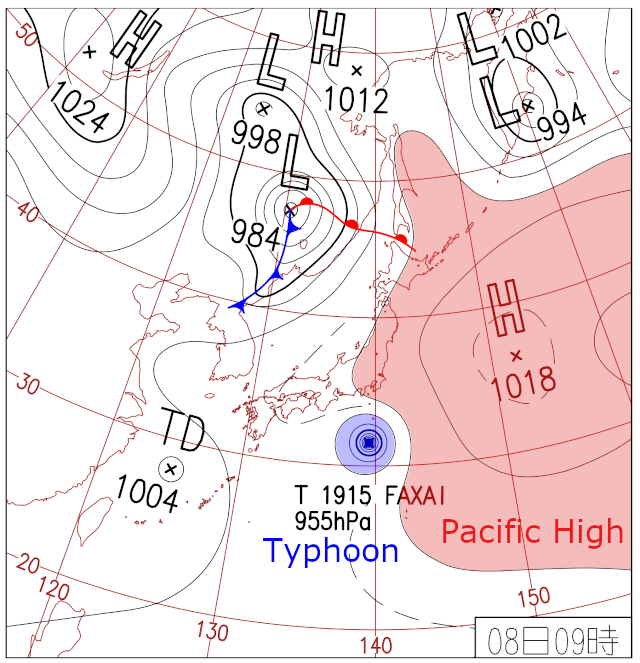 A typhoon brings very strong wind and heavy rain. When a typhoon is predicted to approach Japan, JMA starts publishing special weather bulletins about the typhoon. So, you are supposed to read those official forecasts carefully and take actions to protect yourself, such as changing your travel plan. Please note that the public transportation such as train and flight will change their schedule and even cancel its operation due to safety when a typhoon is forecasted to approach.

A typhoon in Japan typically is stronger in its right-hand side than the left, because a typhoon moves towards north and the wind speed is increased by the speed of the typhoon's movement. Also, stronger rain is expected on the right-hand side because the strong wind brings more warm and humid air from the south. So, if you will be located on the right side of the typhoon's circle, extra care must be taken.

Same as an ordinary low pressure, a typhoon basically moves from the west to east and gradually moves towards the north. As a typhoon moves towards the north, the typhoon can change its structure to an extra-tropical cyclone and JMA will make an announcement if it happens. However, it does not mean that the intensity of rain and wind caused by the low pressure has degraded. Oppositely, it can get even stronger after the structure change. So, please watch out. 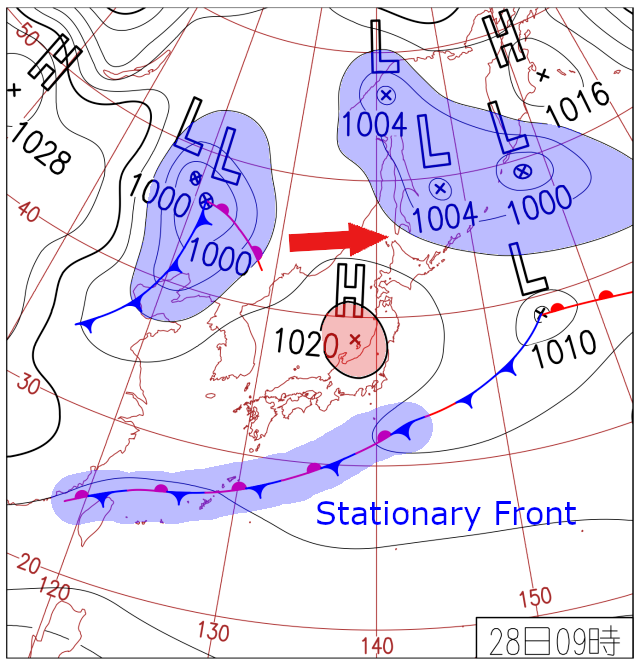 A typical weather pattern in winter is characterized by the low pressure in the east and the high pressure in the west on the surface, which makes north-westerly wind dominant. It's basically cold everywhere in Japan except for some remote islands like Okinawa. Fine days continue in the Pacific Ocean side of Japan because the air becomes dry. On the other hand, the weather is not so stable in the Japan Sea side, because the north-westerly wind takes moisture from the Japan Sea and makes them fall as rain or snow in the Japan Sea side. The air in the Pacific Ocean side is kept dry because of the mountains running the middle of Japan, which, roughly speaking, blocks the moisture from moving to the Pacific Ocean side. 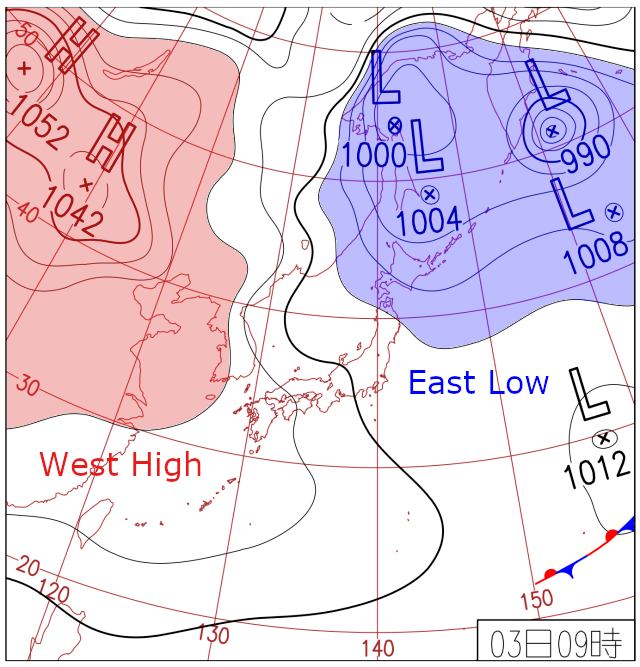 If you visit the very north of Japan like Hokkaido, extra care must be taken for the "white out". Continued strong wind blows up the snow on the ground to make it a blizzard. When the situation gets worse, you will completely lose your sight as if you're surrounded by a white wall, and you will lose the direction too. It's too late when you noticed such a situation, and you're in a serious danger of traffic accident and frozen death. We have heard a sad news like a man who lost his life just a few meters away from his home, and similar accidents have happened like that every year.